The high-end residential district was established at the turn of the 19th and 20th Century in response to the growing demand from the local tradesmen and industrialists. Together with the Town Park, the district forms a complex designed and built by German architects, engineers and the acclaimed garden designer, Alfred Menzl (who also designed the Southern Park in Breslau). In 2009, during a veteran celebration on Wolności square in the vicinity of the park and the residential district, Katyń Memorial Stones were unveiled. Together with the Oaks of Memory, the Stones commemorate the Polish officers murdered in 1940 by NKWD in Kharkov. 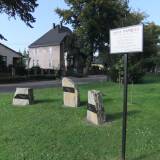