The only one of the five town gates (other Münsterberg gates were the Grodzka Gate, the Breslau Gate, the Nysa Gate and the Weavers' Gate) which survives to this day. Its current form dates back to mid-15th Century, with a styled crest of Münsterberg painted by Joseph Langer. In Münsterberg, you can also see large portions of preserved defence walls. The first fortifications in Münsterberg were built already at the end of the 13th Century by Duke Bolko I the Strict, the father of Bolko II, the first Duke of Münsterberg. The sections of preserved defensive walls stretch along Wałowa street to Oziębłowski square, through Gliwicka and to Przemysłowa and Grunwaldzka streets. You can see the walls on the way to the Town Park and the eagle statue, on the left side of Wałowa street. Mickiewicza street leads through a charming residential quarter, designed and built at the beginning of the 20th Century. 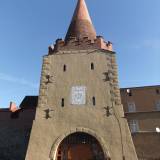